“Grand Ultimate Fist.” A Chinese internal art form that is based in the principles of Yin and Yang. Taiji is characterized by wave-like motion, power releases that resemble shaking or shuddering,

Qigong is an ancient form of chinese “calastenics” designed to help a practicioner build their qi both for use in kung fu as well as for excellent general health. Dasifu’s qi gong techniques are designed to improve the student’s health...

Xing Yi Quan is one of the three most famous styles of internal wushu.It is believed to have been developed by Song Dynasty wushu hero and general, Yue Fei and gained wide spread popularity during the Qing Dynasty.

We are a non-profit organization registered with the Secretary of the State of Texas under 501(c) tax exempt status. The purpose and goal of Shaolin Temple is to promote Buddhism through teaching meditation, tai chi, Shaolin Kung Fu martial art; and to enhance self-healing and cultivate inner peace and harmony. The practice of Shaolin has a history of over 1500 years. Through careful preservation of manuscripts and materials, this ancient way of life has been passed on through the generations by faithful monks carrying the torch that we are able to continue this practice today.

On Wednesday September the 8th the Zhong Yue Shaolin Temple in Houston had its grand opening ceremony.

he Shaolin Monastery or Shaolin Temple (Chinese: 少林寺; pinyin: Shàolínsì), is a Chan Buddhist temple at Song Shan in Zhengzhou City, Henan Province, of what is now the People's Republic of China. The monastery was built by the Emperor Hsiao-Wen in 477 C.E., and the first abbot of Shaolin was Batuo, (also, Fotuo or Bhadra (the Chinese transposition of Buddha), an Indian dhyana master who came to China in 464 C.E. to spread Buddhist teachings.[1] Another Indian Monk, Bodhidharma, or Da Mo, is said by the Shaolin monks to have introduced Chan

Hello students, Grandmaster Shi De Shan has requested trying to move to an online format for the time being. We will livecast on Instagram. We have been testing live casting earlier today on April 3, 2020. Add @Houstonshaolintemple on Instagram and email your full name and instagram ID to: sqng888c@yahoo.com and we will add a close friends list for classes. Thank You. We will test out casting online on April 4, 2020 at 10am CST. Thank You.

Granmdaster Shi De Shan and everyone at the Zhong Yue Shaolin Temple wishes you and yours a happy holidays and very happy new year! We will be closed December 24th and December 25th as well as December 31st and January 1st. We have been working on something very special and will post pictures soon! 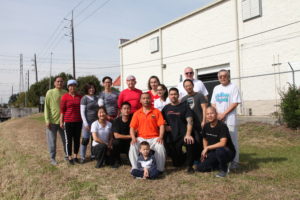